On 6 April 2016, the U.K. government introduced the requirement for each applicable U.K. entity (i.e. most U.K. companies, U.K. LLPs and U.K. SEs) to maintain a publicly available register of persons with significant control (“PSCs”) over that entity (a “PSC register”).  The rationale for this register requirement is to try to tackle the criminal misuse of companies and legal arrangements by increasing the transparency of corporate ownership and control.  From 30 June 2016, the majority of the information contained in a PSC register will also be available 24/7 to the public via a central public register of PSCs to be kept at Companies House.

What do PSC entities have to do?

They must take reasonable steps to establish who their PSCs and “registrable relevant legal entities” (“RLEs”)are.  To help satisfy this obligation, PSC entities should send notices requesting information from anyone that the PSC entity either knows, or has reasonable cause to believe, is or knows the identity of (in relation to that entity) any PSC or any RLE or who knows someone who is likely to have that information.  Non-compliance by a PSC entity with this duty will be a criminal offence (punishable by an unlimited fine and/or up to two years’ imprisonment) for that entity and its officers.

The information that is required to be recorded by a PSC entity in its PSC register includes the name, usual residential address, date of birth and the nature and extent of control or influence for each PSC of that entity plus similar details of its RLEs.  A PSC entity is obliged under the new regime to ensure that its PSC register contains up to date information at all times and, on request, is available (other than PSCs’ residential addresses – these are protected in a similar way to how residential addresses of directors of U.K. companies are protected from public disclosure under the Companies Act) for anyone to inspect or take copies.  From 30 June 2016, as part of its annual confirmation process (the process which replaces the annual return process from later this year) each PSC entity must file its PSC and RLE information at Companies House and which information (other than PSCs’ residential addresses and the day of their dates of birth) will be publicly available free of charge 24/7 on the Companies House website.

What do PSCs have to do?

If any person (including individuals who live overseas and non-U.K. nationals) knows (or ought reasonably to know) that they are a PSC of a PSC entity and meets certain other criteria, they are legally obliged to take pro-active steps to identify, and provide details (e.g. name, usual residential address, date of birth and nature and extent of their control) about, themselves to the entity of which they are a PSC within a prescribed time period.  If a PSC fails to comply with this duty or to respond to an information request from the PSC entity, except in very limited circumstances, it will have committed a criminal offence (punishable by an unlimited fine and/or up to two years imprisonment) and it may also be possible for the PSC entity to ‘freeze’ any interest in the PSC entity, which is connected to that PSC (meaning, amongst other things, that the shares in the PSC entity connected to that PSC may not be sold or voted and (except on a liquidation) no dividends or other payments could be received in respect of those shares). Very similar obligations and ramifications apply to RLEs as well.

Who will be PSCs and RLEs?

The rules for establishing who is and is not a PSC or RLE are complex and need careful consideration and application on a case by case basis, taking into account formal and informal arrangements and relationships of a PSC entity with its direct or indirect investors and may well result in a much wider category of people being caught as PSCs or RLEs than one might expect based on the face value linguistic meaning of significant control and influence.

Technically, a PSC of a company is any individual (regardless of whether or not they live within the U.K. and regardless of their nationality) who satisfies one or more of the following conditions (the “Conditions”) in relation to that company:

In addition, the following are treated as if they were natural persons, meaning that they will be recorded as PSCs of a company if they meet any of the Conditions in relation to that company:

It is worth noting that the conditions for LLPs and tests for RLEs are slightly different (e.g. For LLPs, Condition A is driven off surplus assets on the winding up of the LLP and Condition D could be triggered if a person is likely to receive more than 25% of the profits of the LLP.  For more details on the tests that apply for RLEs, please see further below).  Please contact us if you would like further details of the conditions for LLPs.

By way of example to illustrate the fact that the meanings of the Conditions are not as straightforward or as narrow as the language might suggest, the rules of interpretation for the regime tell us that joint arrangements between persons result in each of them being treated as holding the combined shareholding/rights of both of them and shares held by a nominee for another are treated as being held by that other person.

What does “significant influence or control” in Conditions D and E really mean?

Once again, these concepts are not necessarily interpreted in the manner that one might ordinarily expect.  For example, it is not just controlling or influencing a PSC entity’s policies/activities with a view to gaining an economic benefit that would be caught; every PSC entity policy and activity could be relevant.  Also, veto rights over decisions related to the running of the PSC entity (e.g. relating to the adoption of a business plan or the appointment of a majority of the board) regardless of whether or not the right has actually been exercised are likely to be caught, and all relationships (whether or not documented in a written or legally binding agreement) that a person has with the PSC entity or other individuals who manage the PSC entity must be considered to identify whether the cumulative effect of those relationships places the person in a position where they exercise significant influence or control over that PSC entity.

What happens if a PSC entity is controlled by another legal entity?

(iii)        any legal entity that has voting shares admitted to trading on a regulated market in an E.E.A. state (other than in the U.K.) or on certain markets in Japan, the U.S.A., Switzerland and Israel.

If a legal entity holds its interest in the PSC entity via a chain of other legal entities over which it has significant control (via voting rights or shares) and at least one of which legal entities is subject to its “own disclosure requirements”, only the first legal entity, which is subject to its “own disclosure requirements”, above the PSC company in the chain (i.e. Company B and not Company C in Example 1; and Company C and not Cayman Company in Example 2) needs to be entered in the PSC entity’s PSC register (i.e. in Company A’s PSC register in both examples). 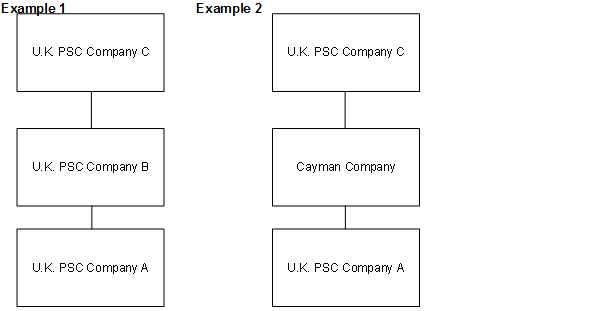 Which U.K. entities will be exempt?

The government believes that U.K. companies, which are already required to provide substantial information about their major owners pursuant to other regulations, should not also be required to maintain a PSC register.  For this reason:

(ii)         U.K. companies which have voting shares admitted to trading on a regulated market in an E.E.A. state (other than the U.K.) or on certain markets in Japan, the U.S.A., Switzerland and Israel,

are exempt from having to keep a PSC register.

Detailed guidance has been published by the government for: (A) companies and LLPs; and (B) PSCs on how the regime is intended to work in practice and what steps they should take in order to comply with their respective duties under the regime. The guidance for companies and LLPs is available here and the guidance for PSCs is available here. The government has also published statutory guidance on the meaning of “significant control or influence”, which needs to be considered when determining whether a registrable person meets Conditions D or E. The statutory guidance for: (A) companies is available here (https://www.gov.uk/government/uploads/system/uploads/attachment_data/file/523120/PSC_statutory_guidance_companies.pdf); and (B) LLPs is available here (https://www.gov.uk/government/uploads/system/uploads/attachment_data/file/523122/Draft_statutory_guidance_LLPs.pdf).